The FLA file format is the "master" document format for Flash projects. When you create a new Flash file in the Macromedia Flash authoring program, you create an FLA file. This contains all the elements which make up the finished product, including graphics, animation instructions, actionscript code, comments, etc. FLA files can only be opened in Flash (not the Flash Player). The FLA file is roughly equivalent to the PRPROJ file in Adobe Premiere. The FLA file does not play or execute. Instead, you export an SWF (or EXE) file which is what end users see. You can preview the resulting SWF file at any time from the FLA file.

The Flash delivery file — the file that end users see. This is a compressed version of the FLA file which is optimized for viewing in a web browser, the standalone Flash Player, or any other program which supports Flash. The SWF files are completed, compiled and published files that cannot be edited with Adobe Flash. But with some Flash decompiler, you can export SWF into FLA for re-edit.

It's another delivery file from Adobe Flash. It is very similar with SWF since they are both output file that end users see. You can export the Flash arts you created as Flash projectors (*.exe). The advantage of the *.exe format is that this type of file can be played on computers that do not have Flash Player installed.

Adobe Integrated Runtime, also known as Adobe AIR, is a cross-platform runtime environment developed by Adobe Systems for building Rich Internet Applications (RIA) using Adobe Flash, Adobe Flex, HTML, and Ajax, that can be run as desktop applications or on mobile devices. The runtime supports installable applications on Windows, Linux, Mac OS and some mobile operating systems such as BlackBerry Tablet OS, iOS and Android, or the BBC IPlayer Desktop.
From Wikipedia

Apache Flex, formerly Adobe Flex, is a software development kit (SDK) for the development and deployment of cross-platform rich Internet applications based on the Adobe Flash platform. Initially developed by Macromedia and then acquired by Adobe Systems, Flex was donated to the Apache Software Foundation in 2011.
From Wikipedia

An Adobe SWC file is a package of precompiled Flash symbols and ActionScript code that allows a Flash or Flex developer to distribute classes and assets, or to avoid recompiling symbols and code that will not change. SWC files can be generated by the Flash authoring tool, and by Flex. They are sometimes referred to as class libraries and cannot be directly executed by the Flash Player.
From Wikipedia

Flash template. The SWT files are 'templatized' forms of SWF files, used by Macromedia Generator. This allows you to edit and replace information in a Flash movie file; for example, a Flash button in which you can replace the text, links, etc.

It is a file format of Flash Video. Supported from version 7, FLV files are the preferred format for delivering video clips via Flash. FLV files cannot be played back directly by the Flash Player — they must be embedded in an SWF file. Confusingly, the SWF which plays the FLV is usually called a Flash Video Player or Flash Media Player.

Android application package file (APK) is the file format used to distribute and install application software and middleware onto Google's Android operating system. To make an APK file, a program for Android is first compiled, and then all of its parts are packaged into one file. This holds all of that program's code such as (.dex files), resources, assets, certificates, and manifest file. APK files are ZIP file formatted packages based on the JAR file format with .apk file extensions. And with Flash capture tool, you can extract Flash SWF from APK files. From Wikipedia 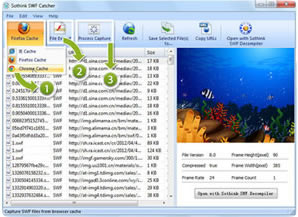 The professional SWF Catcher helps you detect and capture all Flash SWF around from different browsers cache, local files and running process. You can search Flash SWF from Firefox, IE and Chrome cache, and extract Flash SWF from local EXE, APK, AIR and SWC files and spy Flash SWF in current process. We managed to keep track of all your Flash watched! Learn more